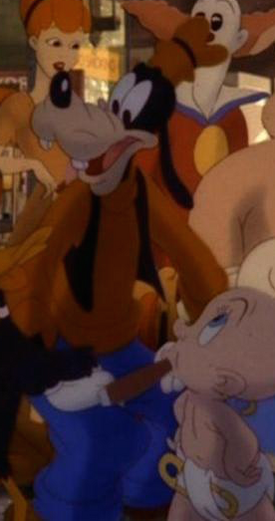 Goofy is a famous toon from the Walt Disney Studios.

Goofy is a tall dogfaced toon actor, typically wearing a strange hat and orange and blue clothes. Though he is best-known for his role as the tritagonist of the Mickey Mouse cartoon series, he also stars in his very own cartoons, such as Goofy Gynmastics.

At the beginning of World War II, he was accused of being a (presumably german) spy, but contacted private detective Eddie Valiant who cleared his name.

Roger Rabbit considers Goofy one of the best Toon actors.

He appeared at the end of Who Framed Roger Rabbit alongside with other cartoon stars.

Retrieved from "https://rogerrabbit.fandom.com/wiki/Goofy?oldid=6200"
Community content is available under CC-BY-SA unless otherwise noted.