Start a Wiki
Baron von Rotten A.K.A Judge Doom is the main antagonist, played by Christopher Lloyd in the film. 1988 Who Framed Roger Rabbit He is the much-feared Judge of Toontown. Despite presiding over a city of Toons, Doom is totally without mirth and passes capital punishment on Toons who break the law, placing them in a chemical vat of turpentine, acetone and benzene (Paint thinner) which he dubs "the Dip". This concoction will dissolve Toons, permanently murdering them when submerged. The Judge employs Toon henchmen (the "Toon Patrol") to assist him in hunting down Roger for the murder of Marvin Acme. Wizard Magazine rated him the 60th greatest villain of all time.

Doom wears a black ensemble which includes a trenchcoat, a fedora, gloves, and rimless yellow-tinted glasses; he also carries a pocketwatch and a swordstick that also serves as a walking stick.

Judge Doom started off as a xenophobic stern judge who holds a hatred towards Toons, even abusing his own Toon Patrol whenever they laugh at something funny. However, this was shown to be a facade to cover his true nature as a heartless, psychopathic, homicidal, manipulative, and sadistic Toon who enjoys doing bad things for his own pleasure, even gleefully boasting to a shocked Eddie that he had killed Eddie's brother Teddy. And he is also known as evil, murderous, fearsome, mean, greedy, abusive, cruel, cold-hearted, merciless, cowardly, calculating, monstrous, ruthless, arrogant, petty, hateful, scary, serious, strict, power-hungry, hammy (at times), brilliant, accountable, rational, obstinate, negative, violent, organized, no-nonsense, reasonable, obsessive, testy, thoughtless, efficient and nasty.

In his human guise, Doom uses his skull-headed swordstick and ACME products to fight Valiant. While in his toon form, he has evil red eyes and a squeaky voice, and is able to produce an arsenal of tools from his body which he can employ as weapons, including a buzzsaw and an anvil. He uses springs in his feet to jump far distances, and (like most toons) can survive anything but his own dip, which dissolves him to his death.

When the film first introduces Judge Doom, Lt. Santino confides to Eddie Valiant that Doom bought the election. Later, at the Terminal Bar, Doom uses the "Shave and a Haircut" trick to lure Roger out, then prepares to execute him. After a brief scuffle inside the bar, the Judge orders the weasels to capture Roger and Eddie Valiant. Roger realizes he's in trouble with Doom after him, and begs Eddie to hide him. When Eddie learns that studio head R.K. Maroon is connected to the plot to frame Roger, Eddie interrogates him, but Maroon pleads that he is "a dead man" if he confesses. Just as Maroon is about to spill everything, he is killed by an unseen gunman who nearly shoots Eddie as well.

Upon chasing the killer to Toontown, Eddie catches Jessica Rabbit, thinking she's the murderer, but Jessica reveals that Judge Doom was the one who killed Acme and Maroon. At the film's climax, Doom traps Eddie, Jessica, and Roger in the Acme Factory to explain his scheme: Literally erase Toontown from the map using a giant, mobile vat of Dip linked to a high-pressure water cannon, and then build a freeway over it. Doom then plans to retire from being a judge and control all the profits from the new road system. Doom also reveals that he is the sole stockholder of Cloverleaf Industries, and explains that he bought the "red car" (a variant on the name of the Pacific Electric Railway) for the sole purpose of putting it out of commission. He then orders Jessica and Roger Rabbit to be tied up and raised into the air via skyhook to be sprayed by the Dip cannon.

Valiant escapes and defeats the weasels then attempts to rescue Roger and Jessica when he is interrupted by Doom. The two men then square off, duelling with various ACME props. During the fight, Judge Doom is run over by a steamroller. He survives, revealing himself as a toon. Doom re-inflates himself with a helium gas tank. As he did, his hat pop off of him and his eyes popped out as well, revealing them to be fake. After Doom re-inflates himself with a helium gas tank, he reveals himself, much to Eddie's horror, as the same Toon who murdered Eddie's brother, Teddy Valiant, thus triggering his hatred towards Toons and explaining how Doom managed to buy the judicial election and the trolley car company. His voice grew higher until it reaches a horrifyingly high pitch and his eyes turn to daggers, showing Doom's intent that he is now out to kill him, as well. Doom taunts Eddie and exhibits his hidden Toon powers, leaping after Eddie with springs in his shoes, changing his right hand into a massive anvil and a circular saw. After Eddie breaks open a vat of Dip with a boxing glove hammer, Doom is doused in his own Dip. While he is dissolving to his death, he shrieks the familiar "melting" lines of the Wicked Witch of the West, cursing Eddie. Following Doom's death, his scheme is finally exposed and all charges against Roger are dropped.

In the graphic novel Roger Rabbit: The Resurrection of Doom, it is explained that Doom was originally a Toon named Baron von Rotten, who took up the role of playing the antagonist in animated movies, until a filming accident in which he suffered a concussion, and awakens believing he is a real villain. Von Rotten thus begins his crime career, robbing the First National Bank of Toontown, then killing Teddy Valiant by dropping a piano on his head from 15 stories, and spreading the stolen money all over the town in order to buy the election for Judge of Toontown, assuming the new name of Judge Doom. 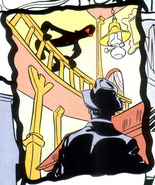 Doom in the comic strip

Add a photo to this gallery
Retrieved from "https://rogerrabbit.fandom.com/wiki/Judge_Doom?oldid=6201"
Community content is available under CC-BY-SA unless otherwise noted.